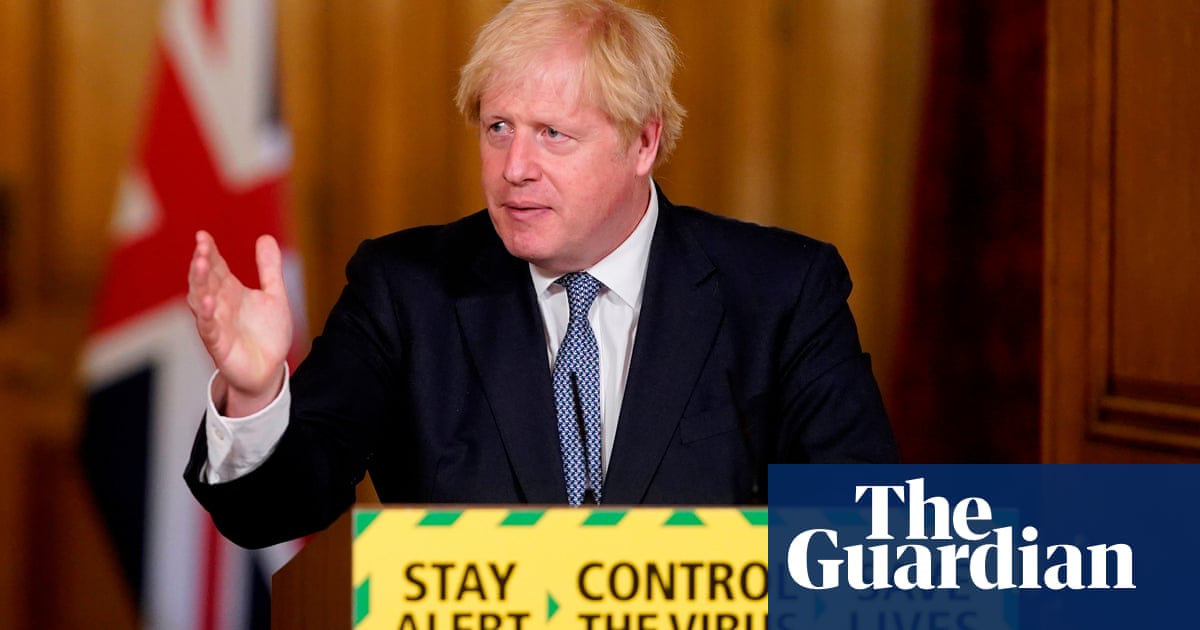 Boris Johnson has reversed a decision to further relax lockdown restrictions in England from Saturday, as the chief medical officer says the country is “at the outer edge” of how far society can reopen with coronavirus.

Speaking at a hastily arranged Downing Street press conference, the prime minister said he was pausing the reopening of leisure businesses, such as casinos and bowling alleys, and preventing beauty salons resuming close-up treatments, for at least two weeks.

It was time to “squeeze that brake pedal in order to keep that virus under control”, he said. With infections rising, Prof Chris Whitty, the chief medical officer for England, said the country had reached the limits of reopening.

Johnson said rules on face coverings would be extended from 8 August, meaning people would be obliged to wear them in indoor venues such as museums, galleries and cinemas, and that there would be greater police enforcement of mask-wearing.

Pilot sports events would be cancelled from 1 August and the decision to allow weddings to have up to 30 guests from this weekend was also being reversed.

However, guidance that employers should allow more staff to begin working from offices again will still be in place from Saturday, part of a government push to get the daytime commuter economy moving again. Shielding advice for up to 2.2 million people who were advised to avoid leaving their homes from March would also be lifted as planned.

The announcements came hours after the government imposed new restrictions on more than 4 million people across northern England. “I’m really, really sorry about that, but we just cannot take the risk,” Johnson said about the impact on businesses and families.

Speaking alongside Johnson, Whitty said that as long as coronavirus was in the community, it was unlikely the economy and society could open up much further.

New official data showing rising infection levels meant England was “at the outer edge of what we can do” in terms of reopening, Whitty said.

“So what that means, potentially, is if we wish to do more things in the future, we may have to do less of some other things,” he said. “And these will be difficult trade-offs, some of which will be decisions of government and some of which are for all of us, as citizens, to do.

“But we have to be realistic about this; the idea we can open up everything and keep the virus under control is clearly wrong.”

This did not mean changing plans for schools to reopen fully after the summer break, Whitty added, saying this was “an absolute priority for the welfare of children”.

Johnson said that since he gave a press conference in mid-July about the gradual easing of rules, “in many ways that progress continues”, such as falling numbers of hospital patients. But, he added: “I have also continually warned that this crisis could come back and we would not hesitate to take swift and decisive action as required.”

Citing new statistics showing a rising national incidence in Covid-19 cases, Johnson said the time had come to “act rapidly”, saying local lockdowns, such as the recent one in Leicester, had worked well.

He also warned of potentially stronger reversals to come: “At this stage, we are not changing the rules on social contact nationally. I don’t want to tell people to spend less time with their friends. But unless people follow the rules and behave safely, we may need to go further.”

The decision to not go ahead with the next stage of easing lockdown appears to have been made at short notice, with public health leaders in cities saying they had not been told in advance.

The prime minister briefed the UK’s devolved governments of his plans on Friday morning, telling them he was planning to make the announcement at midday.

He hosted a phone briefing at 10am with the three first ministers – Nicola Sturgeon in Scotland, Mark Drakeford in Wales and Arlene Foster in Belfast – in which he also talked to them about the local lockdowns imposed on the north of England and Midlands on Thursday night.

Sturgeon was expected to hold an unscheduled media briefing at 2.30pm on Friday to respond to Johnson’s decisions for England. Meanwhile, she issued a statement recommending people avoid any non-essential travel from Scotland to the north-west of England.

Under updated plans announced by the government in mid-July – when Johnson said he hoped for a “significant return to normality” by Christmas – the series of newly eased rules had been due to come into force on Saturday.

These involved the reopening of leisure businesses such as bowling, skating rinks and casinos, and to potentially allow socially distanced indoor performances, for example at theatres, with pilots of allowing crowds in sports stadiums. Beauty salons would have been allowed to resume “close contact services”, such as eyebrow threading or makeup application, while wedding receptions could have involved sit-down meals for up to 30 people.